Neurofeedback is an effective tool for dealing with performance anxiety and fear. Neurofeedback training is a safe way to train your brain and develop confidence. Learn how neurofeedback can help with overcoming stage fright and lead to calmer, happier thoughts.

Performance anxiety is a common fear.  Whether it is giving a presentation at work, making a toast at a wedding or giving a public speech, just thinking about speaking in front of other people can cause a spike of fear.  It is often a source of frustration too, as people logically know that fear mostly gets in the way of doing a good job in these situations.  Fear, which is supposed to alert us to danger and help us stay safe, ends up being an obstacle.  For some it can be so intense that people avoid public speaking altogether, and hold themselves back from advancing at work and in their social life.

Fear and The Brain 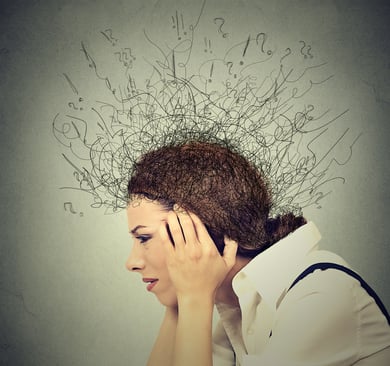 Why don't we have any control over fear?  Why can't we tell it to go away and make ourselves be calm?  The problem, in part, is in the hardwiring of our brains.

The part of the brain that is in charge of perceiving threats is not under conscious control.  Like an overly sensitive motion sensor, it can go off when there is no genuine threat.  Once tripped, it alerts the body by switching into a fear response, also called the stress response.   You can say to yourself, "Don't be afraid', but that only engages the rational center in pre-frontal cortex, or forebrain. The part of the brain perceiving threat is called the midbrain or reptilian brain, and it is not wired to receive orders from the higher-functioning brain. 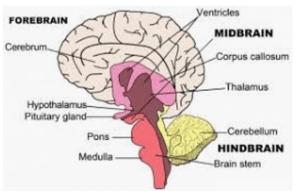 We know when the reptile brain is engaged and sending out fear signals because we feel an increased sense of alertness. Thoughts speed up, breathing becomes shallow, our heart start to pounding heart and we may sweat.   This fear or stress response is essential if you're being chased by a lion but when you're giving a lecture it doesn't help.  The brain does not seem to register that fear of public dislike is not the same as being threatened by a wild animal.  Our biology is still evolving and hasn't yet reached the level of refinement where our higher brain can send instructions to the animal brain to behave appropriately.

Neurofeedback is a frontline brain training technology that helps people reset their emotional patterns, including performance anxiety.  It does so by monitoring and alerting the brain to its moment-to-moment communication so that it can see when it is responding in inefficient ways.  As a result, it helps people shift out of fear response patterns. To understand how neurofeedback benefits performance anxiety, let's look at Elizabeth's story. 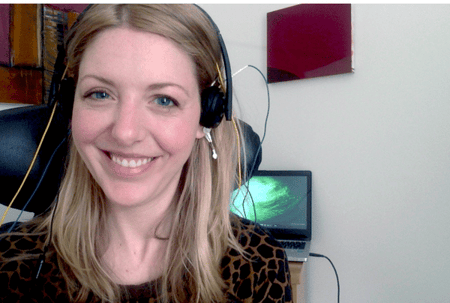 Elizabeth started with NeurOptimal® neurofeedback training at our NYC center after having tried many things to help her performance anxiety.  Specifically, she wanted to unstick what at times felt like emotional paralysis when she was put on the spot at work.  Her mind would start racing and her heart would pound and she wouldn't be able to articulate her points.

She was frustrated and had trouble moving forward professionally.  She was also hoping to get support with managing her sleep, which some nights, was not restful due to her fears of not performing well.

Since Elizabeth began neurofeedback training two months ago with weekly sessions, her feeling of confidence and overall sense of wellbeing have noticeably shifted.   No longer a ball of tension, she often ends training sessions now with a calm half-smile.  While she is still mid-series in her set of sessions, I asked her to comment on what changes she has noticed so far.

After only seven sessions, neurofeedback has literally changed my life. As someone with a history of worry and fears at work, suffice it to say that I had been struggling for a long time.

Before I did neurofeedback training, I was completely a wreck. Now, I'm becoming less and less reliant on my old coping mechanism.  I'm sleeping better, no longer having worrying thoughts before I present at work, and the exhaustion I felt before has faded away.

Overall, I'm feeling much more energized, happier and healthier than I have in years.

how does Neurofeedback work? 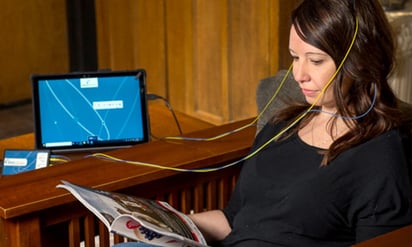 Brain training with NeurOptimal@ is in essence a re-learning process for the brain.  During a session, the brain is made aware of its choices every millisecond via a system tracking the brain's electrical output.  The mind then has the opportunity to note those habits and decide a different response. The brain uses the feedback of its electrical activity thousands of times per session to make itself work more effectively.

Performance anxiety is an inefficient response to our moment-to-moment challenges.  When the brain 'sees' that it is in a habitual response it will shift out of that pattern and gradually learn to optimize itself.  This positive change communicates that the brain is working hard to move into a state of regulation—calm, alert, present-- which it is exactly what it is designed to do when not in a state of threat.

When training with NeurOptimal, you do not need a diagnosis to start. The most helpful tracking tool we ask clients to fill out is a self-report survey.  These questionnaires help clients track and notice shifts in their thoughts, feelings and life choices.

Jenny's neurofeedback review of how it helped her reset her emotional habits.


How to take charge of performance Anxiety

Continue to educate yourself about various brain training techniques for managing fear.  Remember that it is mostly a brain problem and not a will power problem.   Find the tools that work for you and practice them regularly.  Just like any training, neurofeedback requires consistent repetition.  Learn how you can start training your brain in your own home. Heather Coleman, LCSW, is a Certified NeurOptimal® trainer and licensed pyschotherapist, with a Master's Degree in clinical social work. She joined the Neurofeedback Training Co in 2010 having worked as a therapist for four years prior to joining. She has been a mindfulness meditation instructor since 2011. She has worked with populations including addictions and ACoA, pregnant and new moms, as well as adults and couples. Heather has a respectful curiosity and compassion for all her clients and encourages clients to approach thsemselves, and their wellness, with the same attitude. Follow her also on Instagram/themindfulacoa.