Neurofeedback for Children: An Accident Showed Us How Valuable It Is

Is neurofeedback safe for children? Expert NeurOptimal® trainer, Kate Linsley, tells her personal story about using neurofeedback for her daughter after an accident. Neurofeedback is safe brain training for children and adults because it mimics the natural functions of the brain.  Read Kate's story to find out more.

Recently, my two-year-old daughter took a hard fall. While there will be no long-term damage or scars, the event was very frightening and gory. She tripped and fell, the landed her full weight on her upper teeth...right on the edge of a steel-edged staircase.

Needless to say, there was a lot of blood, a lot of pain and a whole lot of tears. In the end, she lost her top four front teeth. The whole family felt traumatized by the experience and that is when I thought: this is exactly when I would recommend neurofeedback. But I asked myself: neurofeedback for my two-year old? 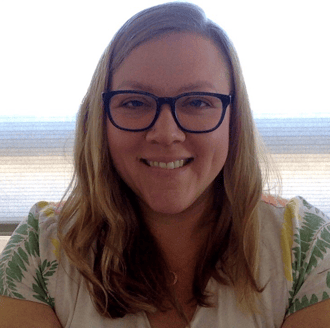 I have been a certified NeurOptimal® trainer for eight years and have worked with many individuals and families over the years.  At first, I was running in-office sessions in New York and managing neurofeedback rentals.

When I moved to Denver, I shifted my focus to coaching our Colorado neurofeedback home renters.  I have been doing neurofeedback on myself, my spouse and my older daughter for years.

I was surprised at my reaction when my youngest daughter had her accident. I wobbled for a moment, wondering if I could train her brain given her young age.  I have trained families and even young children before, but my youngest client at that time had been 5 years old.

There is no risk in using NeurOptimal® on children because it optimizes every brain's performance without forcing change. But, even though I knew the neurofeedback device was safe, I had never trained a two-year-old and I noticed myself hesitating.

Is NeurOptimal® Safe for Children?

NeurOptimal® is safe for children. To explain why, I need to explain briefly how neurofeedback works.  NeurOptimal® works by giving the individual's brain feedback about its moment-to-moment brain wave activity.  This electrical activity is the primary way that the brain communicates.  When the brain is performing a task, it will reflect that behavior in its electrical activity.

Through EEG sensors attached to the sides of the head, the NeurOptimal® neurofeedback device monitors the brain's electrical activity 256 times per second. That is the speed at which the brain is communicating.  When the software detects a shift, it will alert the brain through an interruption in the music played during the neurofeedback session.  The software is designed to use the brain's natural process for detecting changes, which is auditory perception.

Throughout a session, the trainee receives feedback through these interruptions in the music, which alerts the brain to its own process.  The logic behind the system is that once we are alerted to what is happening, we can make improvements.  This dynamical communication between the software and the brain is key for being able to notice and reset patterns.  For a more in-depth explanation of how NeurOptimal works, read this blog.

Watch this video on how a neurofeedback session works.

Signs a child could benefit from NeurOptimal

After we returned from the hospital and began nursing her back to health, it was clear that my daughter was trying to release some of the stress energy accrued during the accident and hospital visit. The day after we got home, her face was swollen beyond recognition and she was still bleeding from the teeth extractions.

I could barely get her to sit still for a minute. She was running all over the house, jumping on her bed and off the couch, and slamming her body into the walls and furniture—behavior we never allowed in our home. She was frantic. Both my children were. 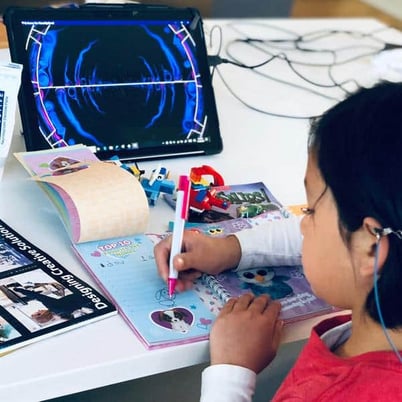 After the first morning of trying to help them burn off some of that energy (and trying not to let it further exacerbate our own stress and shock levels), my wife and I quickly agreed that it was time to let both the kids have their first neurofeedback training sessions at home.

The 5-year-old was thrilled; the 2-year-old was not. It wasn't a surprise, given she had very little interest in letting anyone touch her, let alone hook five wires up to her scalp and ears, and then ask her to sit still.

Nevertheless, with some gentle coaxing, patience and a little help from a very mild television show, we were able to get her hooked up.

What if a child can't sit still for neurofeedback?

That first session was only 15 minutes. She fell asleep shortly after, and she was much less frantic and speedy when she woke up from her nap. The next day, we were able to do 20 minutes, and the day after that, a full 30 minute session. She proclaimed that she didn’t want to do it each time, but reliably gave into a little television bribery and fell asleep immediately after each session. 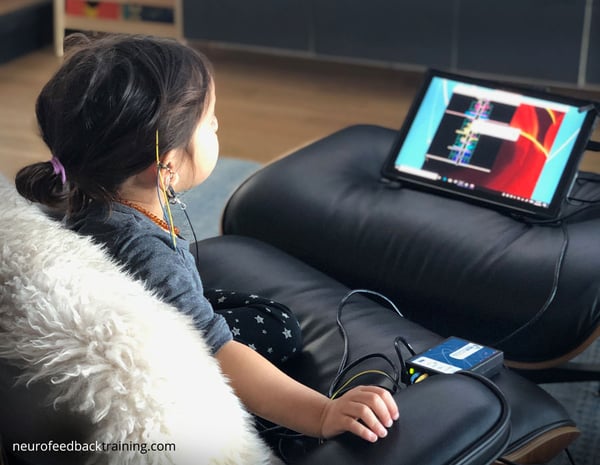 After four days of training, we had to take a break for about a week, because we didn’t have access to a home system at that point. Because she was doing better during the days, and the visible injury had improved significantly after that first week, I didn’t feel compelled to give her NeurOptimal® training. However, our nights were very fraught. She began having night terrors, screaming and kicking while still asleep, and keeping us awake through much of each night. It went on for weeks.

"I want a neurofeedback mamma!"

Almost four weeks after her accident, she had an enormous melt-down that took me completely off-guard. Nothing in particular preceded it, she simply started crying while eating her lunch. The crying escalated into a full-body reaction and sobbing. It lasted for 35 minutes. This was the first time she had ever had a tantrum, and I had the strong sense that she was expressing some of the fear and rage she had contained during the accident, as well as the subsequent oral surgery and healing period.

By the end, she was crying and begging for “a neurofeedback.” I was surprised because she had only ever complained and fought with me about having to do the brain training. 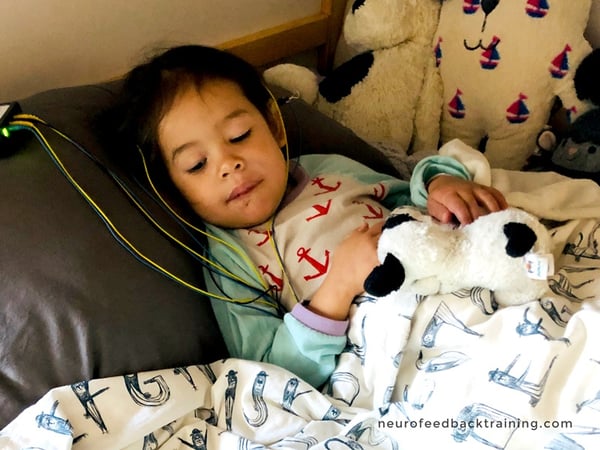 But now she was crying out for it. So, I hooked her up, and she relaxed and fell asleep at the end of her session. For the first time since her accident, she had no night terrors and slept quietly through the night! I was so thankful for the peace and rest we all got, and so happy to see how helpful the neurofeedback training had been for her.

We were able to do a few more sessions on her that week, and she has been steadily on the mend since then—no more night terrors!

I have appreciated the subtle and not so subtle effects of neurofeedback training for years now, but this was the first time I used it for a recent crisis on my own children. I was blown away by the immediate and longer-lasting shifts. From now on, I plan to help my children with neurofeedback whenever they are going through periods of heightened stress.

How to Know if neurofeedback is working

When running home neurofeedback sessions, the key for knowing if the neurofeedback is working is to use the self-report checklist included with every rental.  When children are brain training, parents and even teachers can fill out the checklist and rate focus areas on a scale from 1-10, including emotions, mental factors and behaviors. Observing multiple areas allows us to capture all the shifts that can occur.

Because the shifts from neurofeedback can be subtle, filling out the checklist every 10 sessions is an effective way to know whether the neurofeedback is working over time.

While you are running a session, you can know if the neurofeedback is working by testing that the EEG sensors are functioning properly beforehand.  It takes about 30 seconds to check that they are working correctly.

The only other factor that can impact the quality of a session is whether the sensors are securely attached to the sides of the head with EEG paste.

Securing the sensors, making sure that the volume is high enough for the music to be heard, and pressing the 'start session' button are all that are needed for a successful training.

In general, the benefits of neurofeedback can be seen at various points of training but how long it takes to see shifts for each individual varies because every brain is different.  Many people notice they are managing their sleep better within the first five sessions.

Parents and teachers often notice the benefits children have with neurofeedback training more than the children themselves. This is particularly true for young kids.  Kid's self-reporting abilities are limited and often, like with my daughter, they may ask for the neurofeedback but don't know why they want it. As is typical with young children, they just do what feels right.  Common shifts parents report are: stronger ability to focus on tasks with less struggle, getting along better with siblings, and sleeping better.

The system we use for sessions and rentals at Neurofeedback Trai 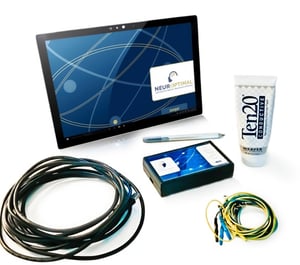 ning Co. is called NeurOptimal®  and is developed by Zengar Institute. Their proprietary neurofeedback system is a highly personalized brain training software that prompts the central nervous system to optimize its use of energy and to only perform functions that are needed for present-moment needs.

Stress responses-- for example, reactive yelling at work--are not an efficient use of brain energy when speaking calmly will do the task. The automatic brain reactively and habitually activates the 'yell response' in communication when undergoing stress.

The brain needs feedback when the here-and-now is not threatening, and it needs to be warned that it is about to use a huge amount of energy to solve a simple issue. Let's say your employee sent out the wrong information to a client. It is much more rational to just address the situation calmly than to scream at them. NeurOptimal training allows the brain to register inefficiency and re-wire itself to use energy more effectively.

Talk to a Neurofeedback Trainer!

Questions about neurofeedback and whether it's right for you or your family? We're here to help! Schedule a FREE 15 minute phone consultation with one of our experienced neurofeedback trainers, Alison, Kate, Natalie or Sara.

Kate Linsley, has worked as a Certified Neurofeedback Trainer at Neurofeeedback Training Co. since 2011. She holds a Bachelor of Art as well as a Certificate in Art Therapies from the New School in NYC. Kate switched from running rental operations in New York to the Mid-Western region after relocating with her family to Denver, Colorado. Kate is also a mindfulness meditation instructor since 2008. Her passion for helping others has led her to pursue part-time studies towards a degree in nursing.

Expert in: NeurOptimal® neurofeedback, wellness coaching, Rental manager for US states in the mid-west