Is Home Neurofeedback as Effective?

With stay-at-home orders ending and families now deciding when to seek services in-offices and when they can be done at home, neurofeedback brain training is one service where home sessions are as effective as in-office.  Learn why.

Fifteen years ago, the only effective EEG biofeedback, now called neurofeedback, was done in a clinical setting with a trained professional but that reality has changed.

It is not necessary to travel to a professional's office with today's technological advances in brain training, the home systems are as effective. Being informed with some essential information is key to navigating the market.

Not all systems called neurofeedback give feedback and the older versions that only work when administered by a trained professional.  NeurOptimal® is one such technology that has transitioned from being only effective when done  in an office setting, to the same results with a home unit.  Learn how the advances in science have lead to the shift safely from being under the supervision of a health care provider to being able to use home neurofeedback effectively and safely at home.

To be an informed consumer it is important to understand that neurofeedback is a VERY broadly used term in the brain training industry.  Many companies refer to their technology as neurofeedback when it neither collects the brain's electrical activity nor provides feedback.

Like biofeedback collects data about the brain indirectly through heart rate and skin temperature, neurofeedback is the process of collecting the brain's electrical communication, also known as brainwaves, through some data-collection device, most commonly EEG sensors and leads attached to the scalp.  That brain frequencies, measured in Hertz are changed from voltage to numbers through an amplifier.  Those numbers are then read by complex software to look for brain activity changes that are then given as feedback to the individual.

A device is truly a neurofeedback system if it includes:

A device is not neurofeedback if: 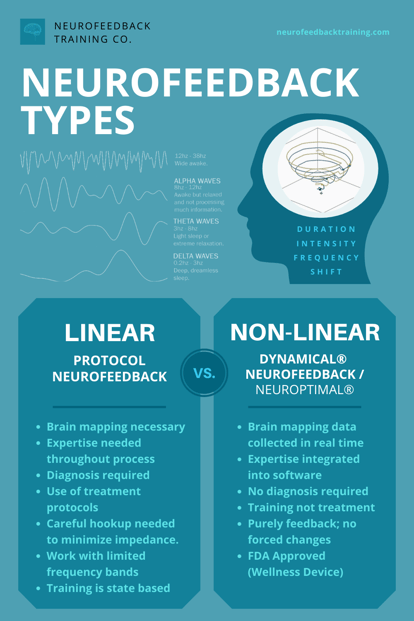 The first generation, known as Protocol neurofeedback, can only be used in-office.  This limitation was in part due to the slower computing speeds of the home computer technology of the time they were created.

The speed was slower than the rate of brain's processing so there had to be an intermediary, the trainer, between the input about the brainwaves and the feedback to the brain.  The an external expert would set goals for the brain to reach in order to reset the brainwave patterns because the computer power was not fast enough for the option of real-time feedback.

The other limitation was in the design.  The older theory of brain health was that you needed the external expert deciding how the individual brain waves needed to change in order for symptoms to resolve.  The process was to entrain and migrate, a form of conditioning, and through that 'nudging' the brain would shift brainwaves to reflect that of a 'normal' brain.  The limitations are that it assumed a linear model for a non-linear system (the brain).  Though helpful, the trainer constantly needs to be reseting and refining the feedback for the trainee's brain so as to continue to see positive shifts and to prevent over training.

The majority of brain training devices are first generation Protocol neurofeedback systems, and because there needs to be on-going assessment and resetting of protocols these systems are only used in an office setting and are not appropriate for home use. 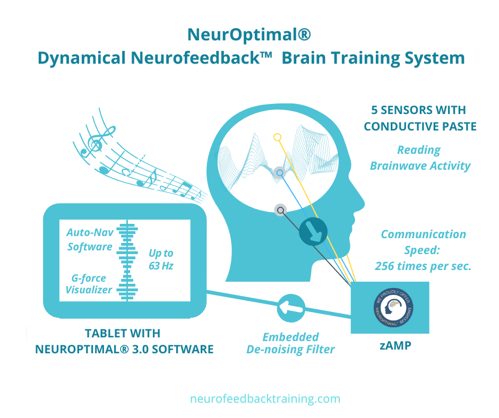 The latest generation of neurofeedback, called Dynamical Neurofeedback™,  changed the design as the hardware technology improved.  The intermediary was removed because the speed of computing power reached that of the brain so the feedback could happen in real-time.

Updating the device design is an important feature when it comes to brain training because the field of brain health and wellness is ever changing and refining.   As new information emerges about how the brain functions and, more importantly, how the brain heals itself through the process of neuroplasticity, the technology needs to change as well.

The second generation of neurofeedback has built-in software that communicates in real-time with the brain using dynamical, nonlinear mathematics.  This system is fully automated and has removed the expert trainer, and replaced it with the true expert: the individual's brain.

Let's use the analogy of automobile technology to understand the history of neurofeedback: the first generation of cars had a manual crank starter, then we moved to a key and now we press a button to start the car.  The latest technological leap is self-driving cars. In much the same way, neurofeedback technology advances as computer power increases. Over the decades, it has made leaps in how it operates and who can run sessions. Most recently, it has made the leap to automation.

That time came in 2011, when AutoNav was introduced to the NeurOptimal® system.  Interestingly, NeurOptimal® neurofeedback is the only  fully automated system.  Dr. Valdeane Brown, (right) clinical psychologist and co-creator of the system, understood that how the brain is designed - to optimize its functioning automatically with meaningful real-time information - made a fully automated neurofeedback system a better design than having the intermediary trainer setting protocols.

Dr. Brown credits Dr. Karl Pribham, a neurologist he studied with at Penn State University, for his understanding of the dynamical, non-linear process the brain uses to function and heal from injury.  He took that understanding as the model for creating NeurOptimal®.  The brain is designed to use continuously collect information about changes in the environment and in itself, and to use that information to shift states and create new neural pathways.

Why is NeurOptimal® Neurofeedback Effective at Home? 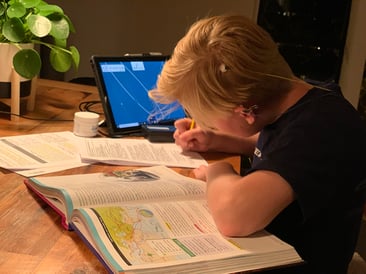 Advancing professional neurofeedback to a design that is purely a feedback system where nothing new is added to the brain, and a device that is fully automated makes it appropriate and safe for consumers to use at home on the entire family.

This design and function was the ultimate goal of the NeurOptimal® professional system.  Drs Val and Sue Brown, both clinical psychologists, wanted to create a system safe for children. 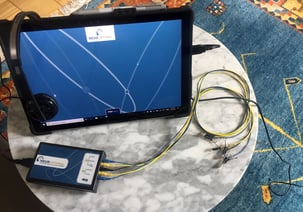 Once the system became fully automated in 2011, it became appropriate for clients to use at home without ever having come in for an office session.

The NeurOptimal® professional system does not have a different software design from the home system.  The difference is just in the interface, making it an easy four step process to run sessions at home.

Learn More
What is Advanced About NeurOptimal 3.0

In 2018, after years of submitting information to the FDA, NeurOptimal® received the General Wellness Device designation they wanted for their device, as a safe product to be used directly by consumers.  This designation, as contrasted to a Medical Device, which requires oversight by a medical health professional, meant that the FDA concluded the systems was safe to use by consumers directly.

Does NeurOptimal® require a QEEG or Brainmap before starting sessions?

No, only the first generation of neurofeedback systems need a brain map to be conducted before starting neurofeedback.  This assessment tool is used for deciding what brainwaves needs to be altered.  The protocols are then set to shift the brain's habitual patterns.  Though essential for some protocol systems, the limitation of a map is that it is a static source of information that quickly can become outdated.

NeurOptimal® in giving real-time feedback, is designed to give that mapping information in real time to the brain moment-by-moment.

How are the benefits from neurofeedback measured?

The NeurOptimal® system was designed so that the individual's self-assessment is the main tool for tracking changes, rather than data generated by the system itself.

This approach facilitates change in two ways.  One, is that it cultivates the individuals ability to be aware of changes as they occur.  (For children, parents and teachers are encouraged to fill out tracking tools.)  The second, is that the broad changes happen when the brain optimizes its overall performance get captured, rather than just the specific changes the individual was focused on.

Having a self-reporting tool that is filled out every 10 sessions helps clients build awareness of the changes that are happening as they train.  Over ten years we refined our Checklist of Concerns to capture the information most helpful for tracking a broad range of areas including cognitive, emotional, and behavioral indicators.   This checklist asks clients to rate their concerns from 1-10 (10 being the worst) and helps us track quantitative changes. For example, when clients see their rate of 10 for "Feelings of Worry, Fear or Anguish"  turn into a 4, they know something is shifting in their mood.

Using a self-reporting tool also helps to stay disciplined with continuing sessions.  When they see the shifts in numbers, alongside noticing feeling differently they will keep their home training going. 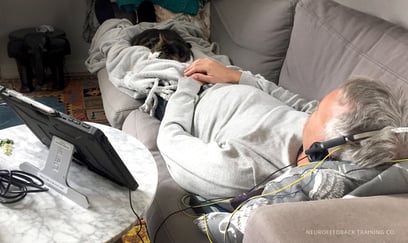 Home neurofeedback, in particular with the NeurOptimal® system, is as effective as training in an office setting.  The updates in the technology, advancing to being fully automated with an easy-to-use interface makes the benefits gained from training at home - less expense and more convenience - a good choice. 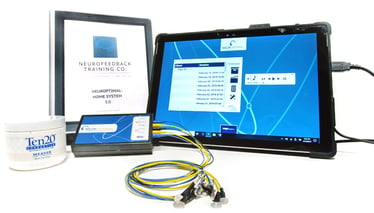 Still have questions about NeurOptimal vs. other types of neurofeedback?