Is neurofeedback different from biofeedback? A comparison

Find out the difference between neurofeedback and biofeedback.  Though they both use real-time information about the physiological changes in the body connected to stress, neurofeedback is different from biofeedback in that it measures the brainwaves. Both are powerful techniques for helping manage stress.  Learn how.

We've put together the most frequently asked questions from people exploring brain training and how it can help them with their wellness and brain fitness goals.  One question we get a lot is: what's the difference between neurofeedback and biofeedback?  Another is: what is neurofeedback? There are actually three categories of feedback technologies: neurofeedback, EEG biofeedback, and regular biofeedback devices.  In this article we'll explore the differences between the three and how they're used to optimize mental and emotional fitness.

Is biofeedback the same as neurofeedback?

To a less knowledgeable person, neurofeedback, EEG biofeedback, and biofeedback are all the same thing.  It's important as a consumer to know the differences in how marketers, clinicians and the FDA define these terms so you can make informed decisions about whether a product is right or appropriate for you or your children to use.

To start with a broad definition of the term Biofeedback.  It is to use real-time physiological information, such as heart rate, skin temperature, brainwaves or muscle tone usually collected through some kind of device to consciously alert your physiological state.   Common uses are for support with migraines, pain and stress management.

What is Neurofeedback and EEG biofeedback?

Neurofeedback and EEG biofeedback specifically use a device to measure brainwave changes to alert the individual to unconscious (or not consciously noticeable) changes specifically in the brain.  Common uses for neurofeedback are stress-related issues and getting unstuck from mental and emotional habits. 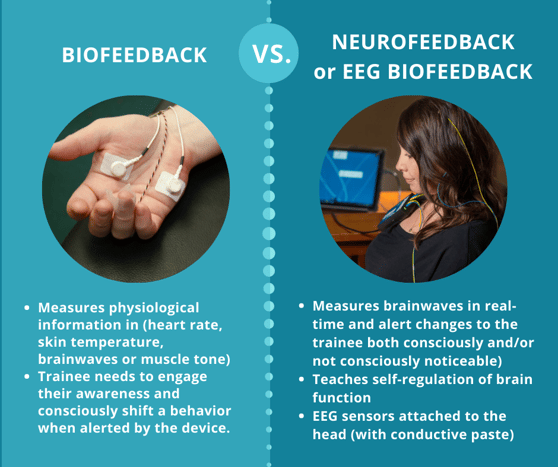 A similarity between the biofeedback and neurofeedback is that they both rely only on real-time data about changes in the body.  Common sources are muscle tension or the micro-shift in brainwave patterns.

Those changes are noted and some mechanism is used to alert us so we can shift our behavior, such as breath deeply,  so as to create present-moment changes towards physiological regulation.  Regulation as defined here is the opposite of a stress response, which is the body's automatic defensive reaction to danger.

The definition of regulation is bringing the body's functioning into a greater alignment with its current needs, in the current environment.  Examples of regulation when the body is in a safe environment are: a slower heart rate, relaxed muscle tone, deeper breathing or in the case of brainwaves activities, Alpha waves would increase.

All of these physiological shifts are part of the same network, so if you start to breath more deeply that will help the other physiological responses to shift into alignment.   Why both biofeedback and neurofeedback target the stress response physiological changes is because, when chronic these habitual patterns, contribute to many chronic health conditions. 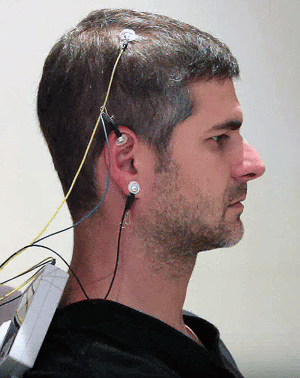 A significant difference between the biofeedback and neurofeedback is how the client or trainee interacts with the equipment.  With biofeedback devices the user needs to engage their awareness and consciously shift a behavior when alerted by the device. For example in biofeedback we may consciously notice our heart rate change and then use deep breathing to lower our heart rate, which helps us to shift out of a stress response.

Whereas with most neurofeedback devices the majority of the work is done by the unconscious-controlled part of the brain.  The feedback for the brain is happening at the speed of milliseconds and so even though the client may think they are willfully doing something with the feedback, actually the automatic functioning brain is receiving, and using the feedback, often delivered through shifts in visual display or auditory input.

How marketers and trainers define Neurofeedback

There are a lot of devices that are marketed as a "neurofeedback device," Some of them are pure feedback devices, some use entrainment and migration where the brain is 'coaxed' into new brainwave patterns, and some systems that don't even monitor the brainwave activity at all!

The most common types of neurofeedback are linear, Dynamical®, and fMRI (though the latter is less common due to the cost). In the history of the development of using real-time feedback of the body's functioning to help optimize health, neurofeedback is an advancement in biofeedback. It measures brain waves to produce a signal that can be used as feedback to teach self-regulation of brain function [Learn more from Wikipedia].

It has been around for over 40 years, but its practical use was inhibited by the scarcity of the computing technology to deliver real-time feedback to the brain, which requires measuring microseconds.  With the advancement of the speed of computers it has been developed into a powerful technology designed to communicate with the source of unhealthy habitual patterns. 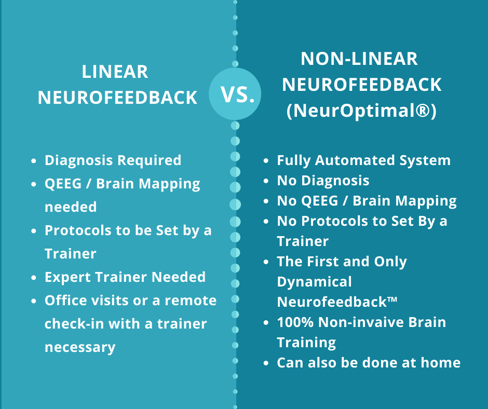 Clinicians or neurofeedback trainers tend to refer to any device they use that collects brainwave patterns as neurofeedback or EEG biofeedback, and devices that monitor other physiological responses in the body as biofeedback.  Any equipment that uses EEG sensors attached to the head to collect data would be called neurofeedback equipment.

Therapist and other health care providers may use biofeedback techniques, which don't even require equipment to note the physiological changes.  For example, a common technique used to help people learn to relax is to notice when their muscles are starting to tense.  They may start by using a device that measures the tension but then learn on their own to employ relaxation practices such as deep breathing, or a body scan meditation to relax their muscles and facilitate the entire body going into the relaxation response.

What is the Best Neurofeedback Equipment?

Confused?  You're not alone.

The FDA's definitions are vey technically specific.  It uses those terms when a device has been approved by them to be medical biofeedback devices whether they are measuring brainwaves or other physiological responses to treat a specific medical condition or symptom of a condition.  It is up to the manufacture of the equipment to formally request the FDA to consider their equipment to be a medical device or not based on the claims they want to make about the equipments intented use and outcomes.  The FDA does not define a neurofeedback device a medical device because it is a process not a treatment per se.

That is why you can have devices calling themselves neurofeedback without even needing to measure brainwaves.

What is Direct Neurofeedback?

Remember that definition of neurofeedback as a process so it can be used more broadly?  Here's an example of why you need to be educated about what actually happens during a neurofeedback session in order to make a fully informed decision.  Direct neurofeedback is actually not a feedback system but rather directly influences the brainwave patterns.  It sends an electromagnetic current to the brain that causes a slight fluctuation in brainwaves to disrupt the electrical system.  So rather than providing feedback to the individual about what is happening dynamically in the brain, it is directly adding current to alter the the brain wave activity of the individual.  Direct neurofeedback is a newer device and fits in the category of transcranial microstimulation devices. 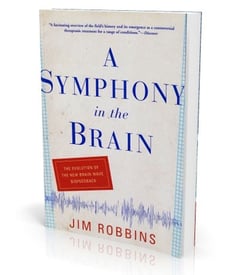 Linear neurofeedback uses set protocols to use the unconscious behavioral techniques of entrainment and migration to force brainwave patterns to change so that they will act more like what normal brains do.  Dynamical neurofeedback is purely a feedback system designed based on how the brain naturally knows how to use feedback about its patterns to make shifts towards regulation happen.  Read more about the differences. 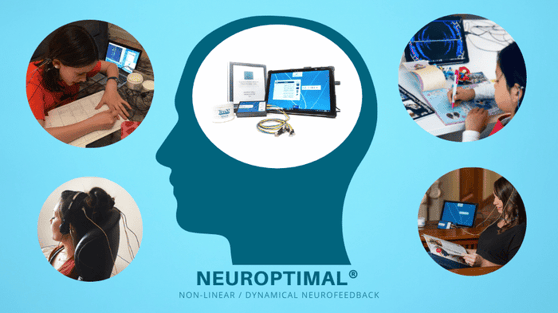 The neurofeedback device we selected for our centers is Dynamical® neurofeedback and developed by Zengar Institute. Their proprietary system is a highly personalized brain training software that delivers the feedback about brainwave changes through interruptions in auditory input.  We chose it over linear neurofeedback because it's purely feedback, 100% safe and non-invasive.   It received the designation by the FDA as a safe General Wellness Device, which means consumer can access brain training directly and do not need a doctor's referral or prescription.

What is neurofeedback and how does it work?

Sara St. John, started with neurofeedback training in 2011 as a customer. She loved it so much that she switched careers and became a certified NeurOptimal® Neurofeedback Trainer in 2015. She came to Neurofeedback Training Co with expert operations and communication skills from her previous 20-year career as a graphic designer. She is the rental manager and coach for the West-coast region- California, Washington and Oregon.